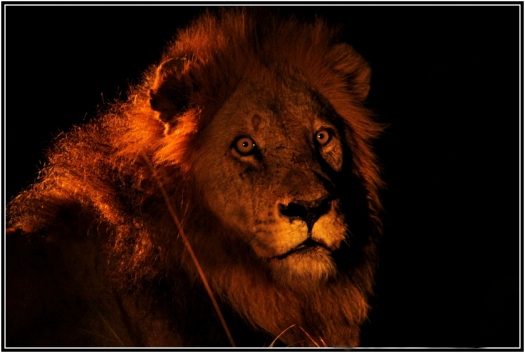 Weather has been very kind to us in February – rainfall only gracing us in the form of afternoon thunderstorms, which was every seven to eight days apart. For the rest of the time it was generally hot and sunny to partly cloudy. At Inyati this time of year it’s all about billowing green grasses, dark stormy skies and wildlife enjoys the seasonal abundance of nourishment, puddles of rain water provide moisture for a kaleidoscope of butterflies, and herds of Impalas swell to large numbers. In the middle of the month we experienced a huge shower of rain over night, which caused the Sand River to rise as much as two metres on our lodge’s lawn.

The Mapogo brothers are still remaining mainly in our concession, all three of the original six have been together quite a lot recently they actively roaring, patrolling and scent marking their territory. The older male is looking a bit past his prime and battle scarred but is holding on in style and we found him mating with one of the Ximungwe lioness during the first week of the month of this report. 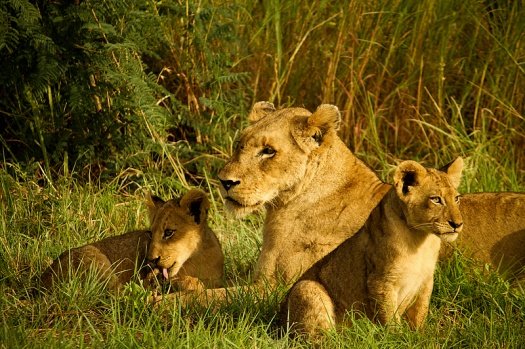 All five Ximungwe female lionesses are doing really well the older, mother of the 2 older cubs managed to bring down kudu bull. About a week after the kudu meal she was found feeding on a buffalo kill with two of her sisters. Great news, one of the Ximungwe lionesses was seen with four brand new cubs which will hopefully show themselves more regularly soon. We also know of another Ximungwe female in the north with some cubs which we haven’t seen yet.

Hlabankunzi female leopard has expanded her territory further east since the loss of her one cub, She hasn’t been seen as much with her cub lately. In attempt to protect her remaining cub she spent about five days with Xinzele male leopard. She was approaching the male displaying mating behaviour – but failed to convince him to mate with her. Her remaining (13 months old) cub has been seen numerous times over the past couple of weeks far in the east away from Xinzele’s territory. The mother is doing everything possible to distract the male until her cub is independent which should only be in few months. We saw her successfully kill a helmeted guinea fowl. Hippo dam female was found with the Xinzele male south of the Sand River with an impala kill. She seemed intent on mating, but Xinzele did not seem interested at all. During the night the kill was stolen by two of the Mapogo, and the next morning, Xinzele left the Hippo Dam female leopard, without having mated with her .Only couple of days after, Xinzele was seen in the far west of the reserve, going deep into Thekwane male leopard’s territory, who hasn’t been seen for quite some time.

Tlangisa female leopard is fast becoming one of our favourite leopards she really is a magnificent young female, so relaxed with vehicles and allowing us to truly learn her behaviour. She has taken over Mambirhi’s territory but it has not been all easy! She was involved in a territorial clash early in February with the Metsi female who is her older sister about 3 years older but she held her own, Tlangisa managed to get in a lucky punch, leaving Metsi with a swollen black right eye.

The arrival of the three male cheetahs our concession has been definitely the highlight of the month. The guests and guides alike were all spoilt to a week of great cheetah viewing .They were initially a little skittish, most likely because of the new area and them being unfamiliar with the layout, by the end of the week they had relaxed. The cheetah spent a couple of days further south of our lodge and then moved further to our western boundary where they were viewed stalking Impala on the Airstrip for quite some time. That afternoon they were seen on an Impala kill which offered some good viewing. They were seen around this area for the next couple of days, where after they moved to the north of the Sand River and then made their way back east

Elephants were few and far between in the beginning of the month due to the rainy season and the availability of new food and water sources. They tend to slow down their movements in times of plenty which makes it harder to find them. Toward the end of the month they seem to have come back and have had a few good sightings of them swimming in the dams that are now filling up nicely with all the rains.

The large herd has joined us again, we seeing them mainly in the southern part of our traversing areas with the herd consisting of a couple hundred buffalo they are not hard to find.

The hippo population is also doing very well, and most of our dams have one or two hippos present. This month we also had a few sightings of hyena, which have been pretty scarce of late. One in particular had impala carcass on his month possibly stolen from a leopard and taken to the den site.

Impalas, warthogs zebras and waterbucks have delighted us appearing on the northern bank exactly opposite the Camp several times, which proves that at Inyati Game Lodge you don’t need to leave your room to see the animals, they come to see you.

That’s all from us this month, we thank you for spending few moments with us in the wilderness, shared our experiences and joined our adventures, we are committed to keep you updated.